THE EYES ARE THE WINDOWS OF THE SOUL

This month's project is a bit introspective.  I believe that our art is a reflection of what is going on inside of us.  Sometimes it evolves unconsciously as we create.  That is what happened on this canvas. 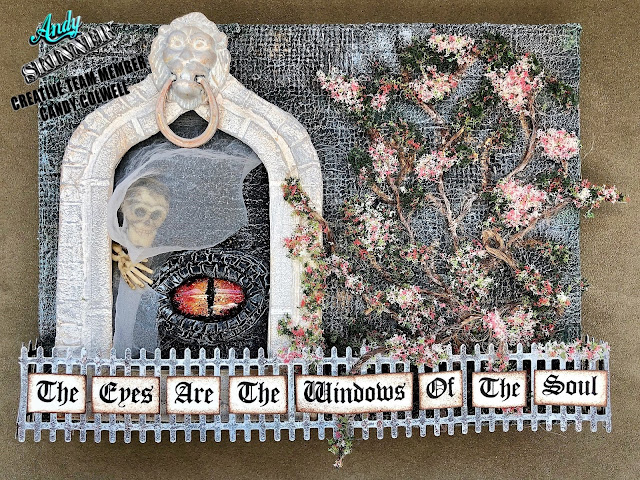 My inspiration for this piece is the gorgeous eye that a dear friend of mine creates. I will get more into that on my blog, if you're interested in more about them.  But this piece was created completely around that mysterious, all seeing eye.

Sometimes we just need to let our art flow...it's amazing what you may discover when you don't plan out a piece; just let that inner creative voice take over.

I began with a 5" x 7" burlap canvas.  It doesn't need to be burlap but it does add to the texture. This canvas is all about texture and depth.  The more layers, the more of each is achieved. 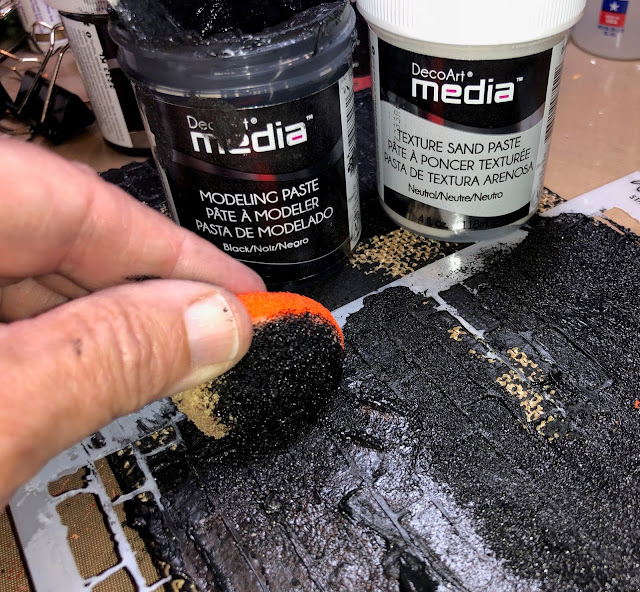 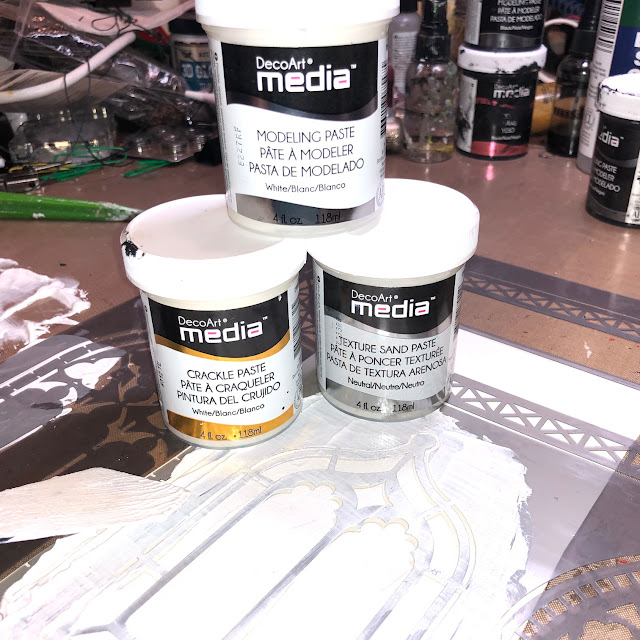 I love windows; particularly gothic or ornate ones.  So this stencil was the perfect choice for this canvas.  (I removed the center section of the window for this piece). Using a piece for heavy cardstock, I scraped a mixture of DecoArt Media Crackle Paste and Texture Sand Paste through the stencil with a palette knife.  I let this dry on it's own because of the Crackle Paste.  I got a tiny bit of crackle ... but I didn't want a lot. Once that was dry, I painted more of this mixture around the outside edges of the window so that I could make it thicker.  I added slits using an exacto knife around the outside edge that I was adding to create a nice "stone finish" to the outside edge of the window.  Then I let it air dry. 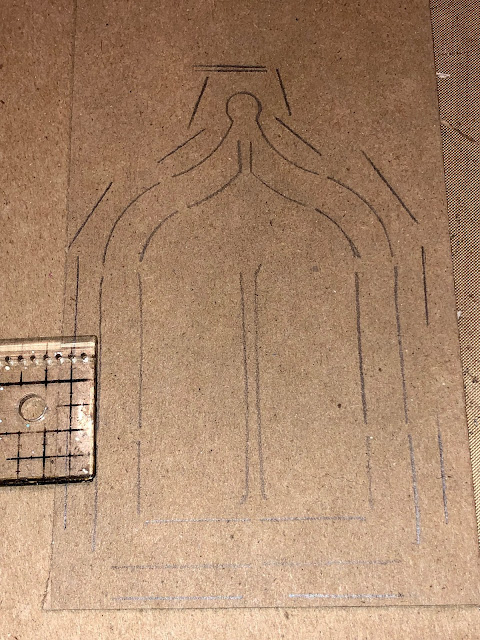 While that was drying, I created a larger outside for the window by 1/4" using scrap chipboard and a ruler to measure all the way around the original window.  I cut it out three times and removed the center of the window. I glued all the chipboard windows together for thickness and again, to create the illusion of a beautiful, thick stone ornate window. 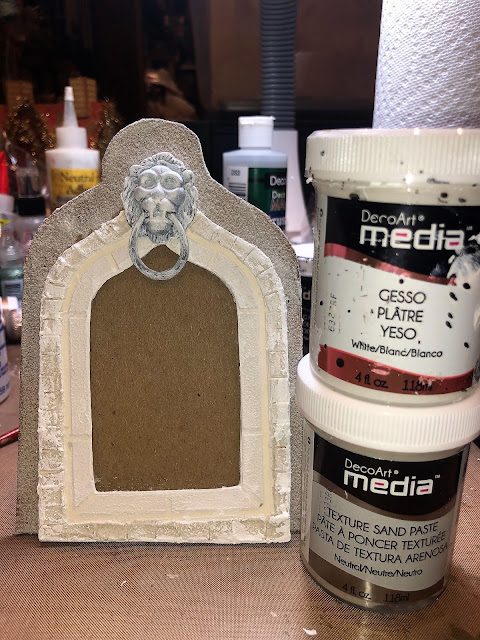 When it was dry, I added a metal lions head to the top of the window and then added a light coat of DecoArt media White Gesso mixed with DecoArt Media Texture Sand Paste to really pop all of the detail on the window and give it a beautiful white cast stone effect. 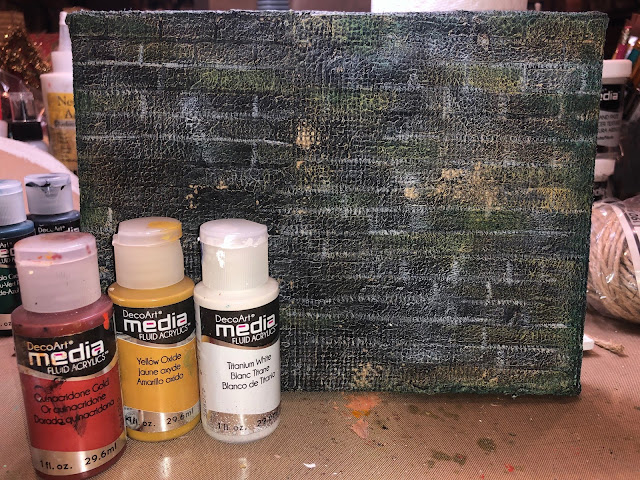 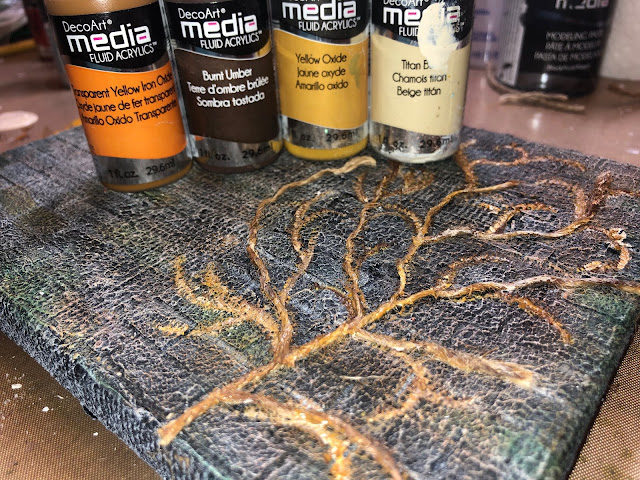 The tree or bush next to the window was created using a piece of jute.  I separated the strands of jute and ran a bead of FabriTac Glue (working in small sections) where I wanted the branches to go.  Then I glued each piece of jute in place.  Once dry, I used a small brush to make it look more like the bark of a tree.  I love the texture and the elevation of the branches.  First I used DecoArt Media Fluid Acrylics Titan Buff followed by Burnt Umber then Yellow Oxide. I continued to layer those colors and finally added a touch of DecoArt Media Fluid Acrylics Transparent Yellow Iron Oxide to sort of melt the tree branches into the canvas. 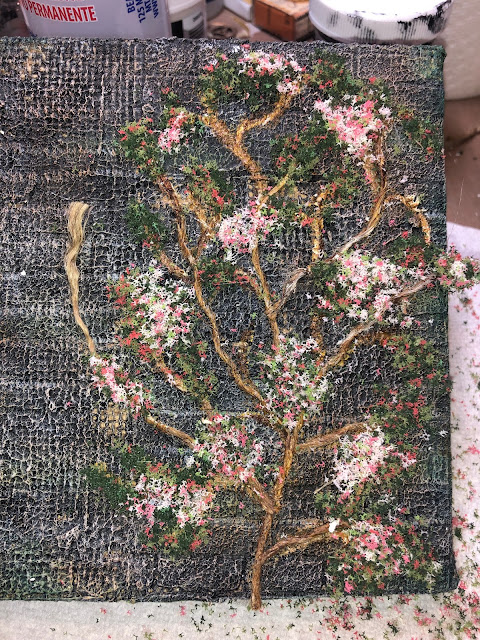 Using the FabriTac Glue again, I added little foliage and flower patches of Flower Soft on the branches of the tree and eventually the window once I added it to the canvas.  I intentional left a few of the branches longer so that they could hang over the fence and the window.  The fence was a rusted metallic little fence.  I dry brushed some DecoArt Media Fluid Acrylics Titan Buff on it to soften the color.  I love the results! 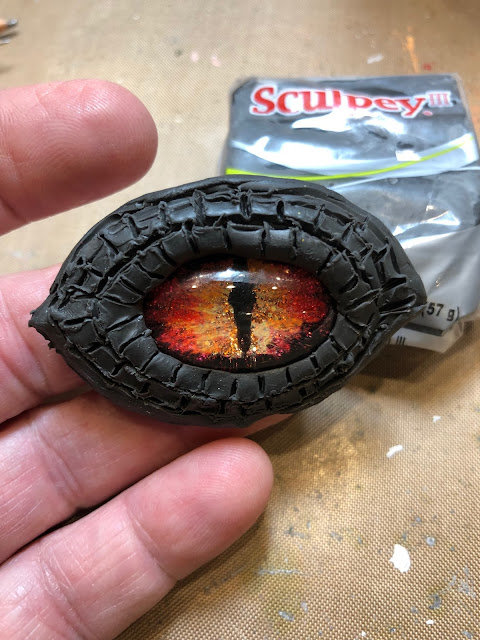 And finally...the inspiration for this entire piece ... that fabulous eye!  I fashioned a socket for the eye using Sculpey Black Clay.  It is an oven clay that has to bake for 15 minutes at 275 degrees.  I was not sure the eye would take well to the oven but it did ... perfectly!  After I fashioned the socket to snuggly surround the eye, I used a craft pick to create the illusion of scales around the eye then off to the oven! 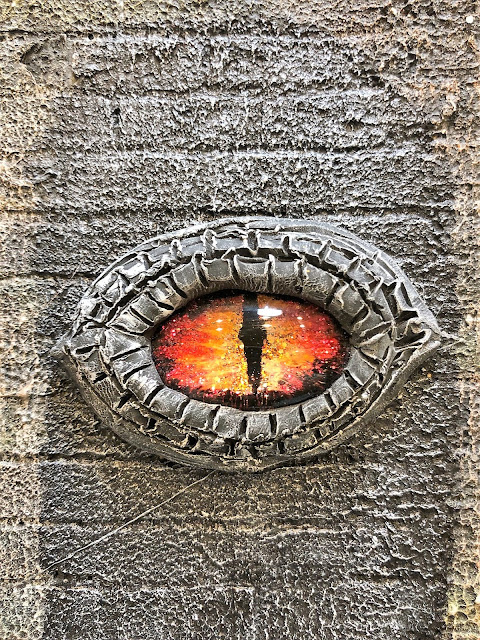 I dry brushed all around the eye and the background that would show from the window using DecoArt Media Fluid Acrylics Titanium White over the black background.  I absolutely LOVE how the eye turned out. 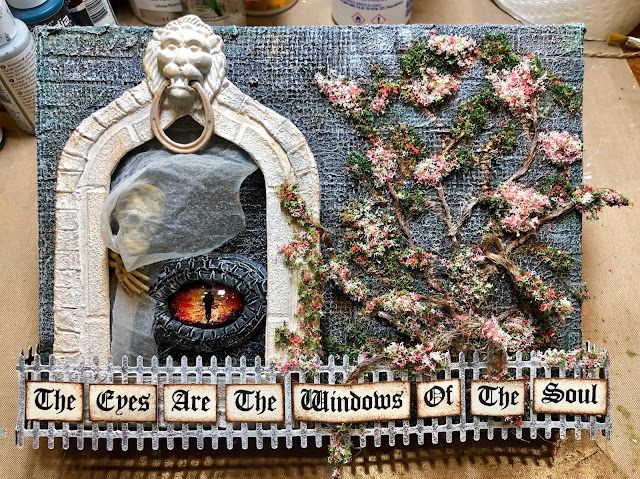 The final step was gluing everything in place.  The sentiment was computer generated and added to the fence once it was glued in place.

On my blog, I will go into more detail as to the underlying meaning of this canvas that emerged as I was working on it.  As I said, sometimes our art lets us express ourselves in a way we didn't even realize we needed to.  Don't be afraid to just sit down without planning out a piece.  Just begin and let your creative nature take you where it wants to go.

Here are the products used to create this canvas: