I am currently working on some samples for Tim Holtz using his idea-ology and Sizzix Alterations range, sometimes in the work I do I am sent and forced to use stuff that does not inspire or enthuse me but for these projects I have been given choice!… yes you heard me correctly….choice….. it's a wonderful thing and very much appreciated!
It all started with one of the square inner boxes from a configurations box and here is the finished little fella… bot-ology! 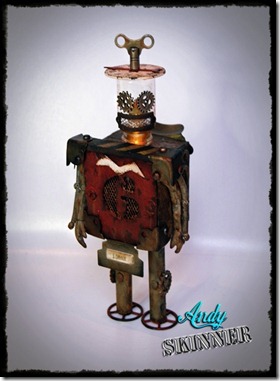 I cut the front panel from grunge board and die cut it with No 6 from the Cargo Stencil Movers & Shapers die and stuck some aluminium mesh on the back.
Card was then embossed with Diamond Plate & Riveted Metal Texture fades and glued onto the box. 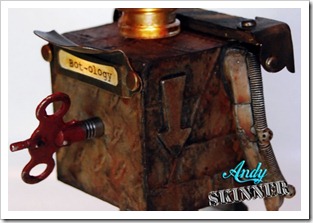 A corked vile was used for his head and cogs stuck on for the eyes, then a label tab from the Grunge board mixed minis was used for his mouth.
I drilled a hole in the top of the box and fitted a small battery operated LED light inside to light up his head. 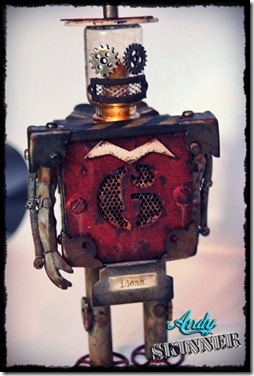 I could go on and on but I am sure in the pictures below you can see the idea-ology parts used before painting, I will say however that the arms were from a toy robot and the legs made from two old pens which were filled with nails before attaching to give him some weight and stability. 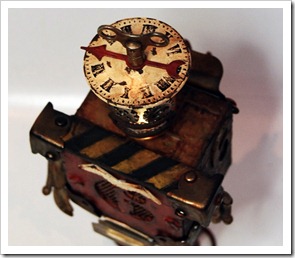 This bot-ology robot is a prototype… yes more of these to come lol
Here is a back view. 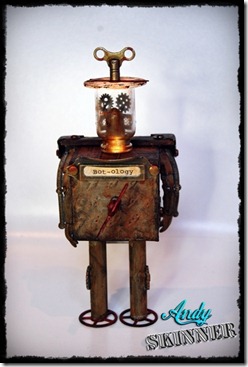 Lets all build a bot!
Andy
Posted by Andy Skinner at 08:40